Members were asked what they consider to be the top priority in ensuring Scotland's art sector is a healthy, viable and sustainable area to work in...

The Scottish Artists Union are keen to understand how external factors, such as Brexit, affect members. Members were asked what the impact of the Brexit vote has been so far on their practice and working life.

Over half (63) of the survey respondents provided an answer to this question, for those that answered, nearly a quarter (24%) noted that Brexit has yet to have an impact on their practice.

For those that felt it has had an impact (a few were clear to mention that they didn’t have proofthat the impact was directly as a result of Brexit), this was mainly in relation to a reduction in their sales, explained by higher levels of caution from buyers and reduced spending.

Some talked about increased costs of materials, and their inability to develop international links since the vote therefore impacting on the opportunities for international work.

Others commented on the uncertainly around Brexit – particularly in relation to what the impact will be once it actually happens, the not knowing aspect of it leaving a sense of anxiety about the future:

When asked about the impact of Brexit on future plans, 70 out of the 104 respondents provided comments.

Again, popular responses were around the uncertainty of the future, respondents not knowing what is going to happen and how they might be able to respond – with an overall sense of negativity about the impact, despite not knowing what that impact will be.

Over a quarter (27%) had worries about European connections – members talked a lot about the loss of opportunities to work and collaborate with European colleagues.

Some talked about the reduction in funding available, and the perceived impact Brexit will have on the wider economy is leading to less sales and commissions of their work.

A small number of members felt however that there would be no change.

“It remains pointless trying to talk to European colleagues about projects that might entail funding from EU-supported sources being spent in the UK or vice versa.” 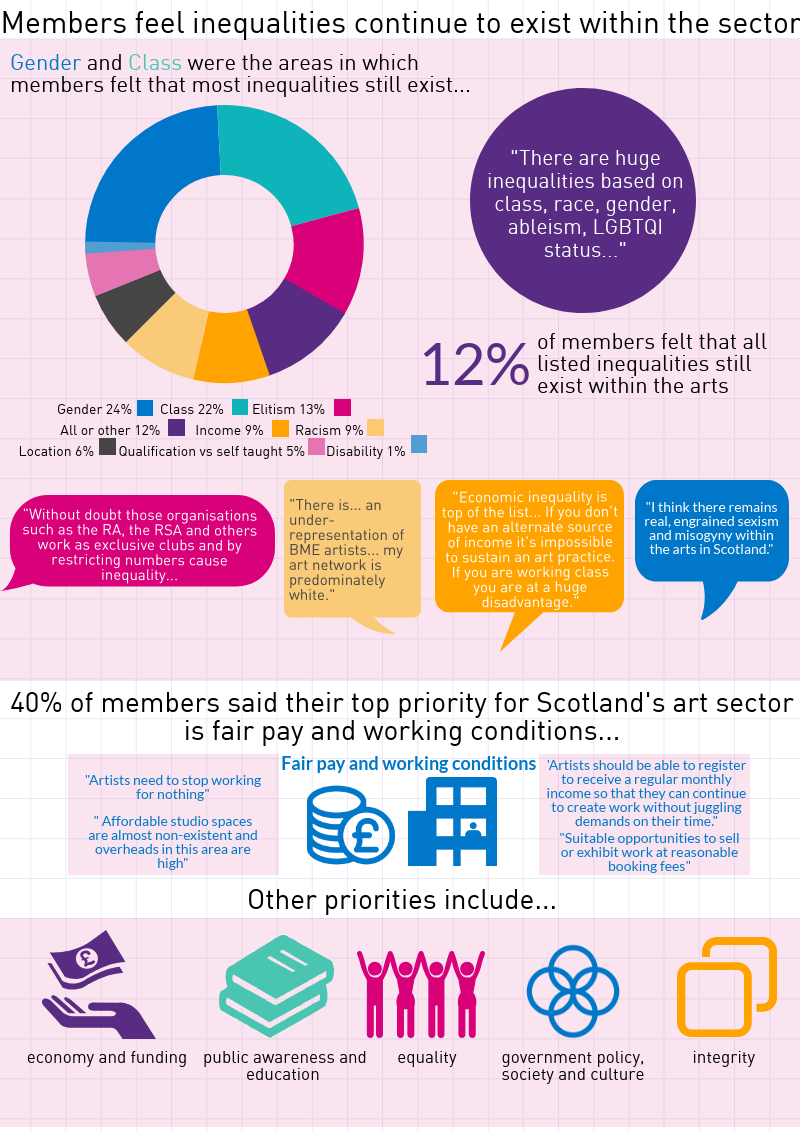 Another external factor the Scottish Artists Union are keen to know more about is equality. The survey therefore asked a small number of questions about members’ thoughts on theinequalities that exist within the sector and how this affects their career paths.

Over half (63) of survey respondents answered the question on inequalities within the arts.

While one member noted that there has been significant improvements in relation to gender, largely due to more women working in the sector and actively supporting each other, others suggested that there is still inherent sexism within the sector.

Related to this, some members identified continued societal expectations for women to also run a house and take on caring responsibilities often impacting on their practice, and the fact that there are still experiences of a gender pay gap. One also talked of the “slightly sexist attitudes regarding female painters - that their work ought to be more ‘comfortable’.“

Responses around social class centred largely on a perception that people in the arts are predominantly from more privileged backgrounds - this is supported by the analysis of membership location data in relation to the Scottish Index of Multiple Deprivation, presented in the following post.

Some talked of the challenges faced being an artist if you don’t have family supporting you.Respondents who identified as working class talked about their isolation at art school and a realization that those with money are those more able to pursue a more viable career. Some felt this also links to the perceived nepotism and elitism that feels rife within the sector.

Other inequalities mentioned were ageism, racism, income, and geographic location, how well known you are as an artist, and whether you went to art school (or were self-taught).

When asked whether the perceived inequalities within the sector affect their career paths, 45% of the 71 members who answered this question responded yes, 17% answered no, and 38% answered maybe.

Priorities for the sector

Members were asked what they consider to be the top priority in ensuring Scotland's art sector is a healthy, viable and sustainable area to work in. Two thirds (65%) responded to this question.

Well over a third (40%) of those members who responded consider fair pay and working conditions as the top priority for ensuring the sector is healthy, viable and sustainable area to work in.

“Artists need to stop working for nothing.”

Members also talked about the need to be able to access affordable studio spaces in order to carry out their work.

Other popular responses were the need to be able to access funding, and making funding more readily available.

Members also mentioned a need to raise public awareness about the value of the arts and the impact it can have, particularly pointing to a change in the way government policy supports the arts.

Comments were also made on the need for artists to support each other, creating opportunities for professional development and the sharing of learning to strengthen them as a sector.