The Scottish Artists Union has, since its inception, been concerned with establishing recognised national standards in artists’ rates of pay and the use of contracts...

The Scottish Artists Union provide guidelines on typical rates of pay which members are invited to use when negotiating payment for their work on short-term contracts, sessional work and residencies (paid on a self-employed status basis). Support is also provided should members come across issues in relation to the use of contracts. The annual survey asked members about payment according to the published rates of pay and their approach to the use of contracts when negotiating and agreeing work. This section provides information on the responses to these questions. 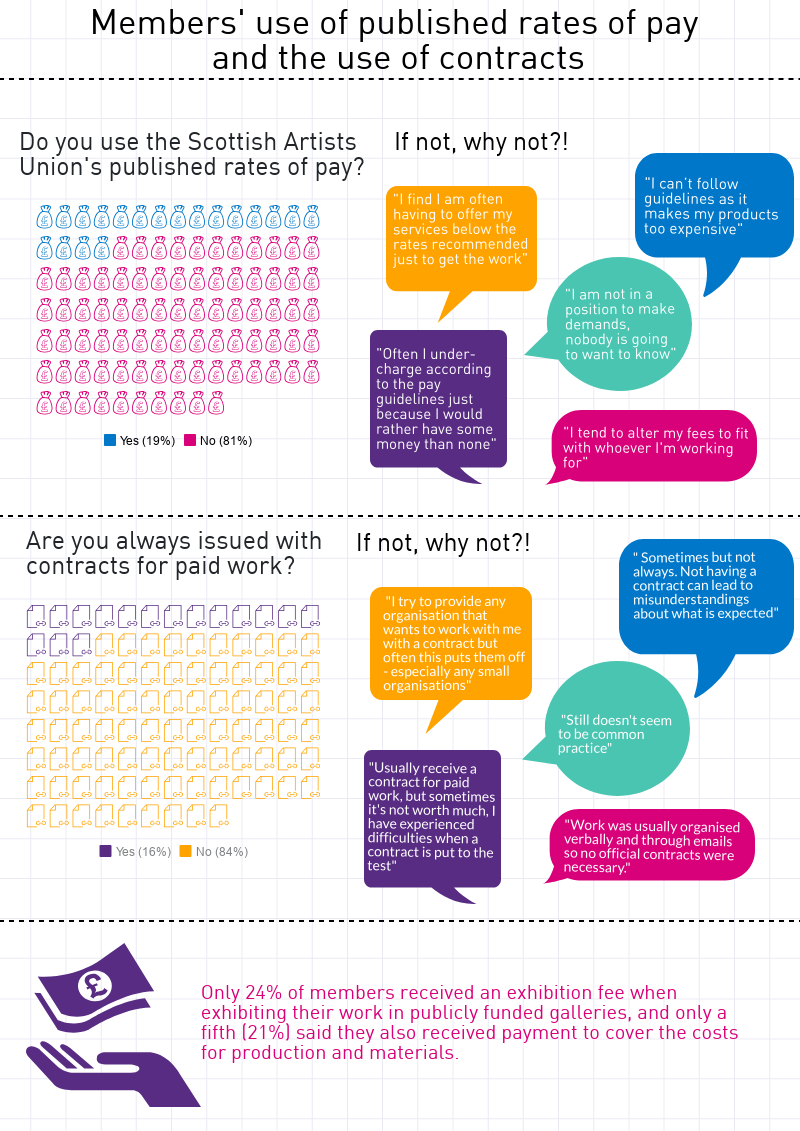 7.1 Payment according to recognised rates of pay

Members were asked whether they regularly receive payment according to the Union’s guidelines. A total of 77 people answered this question, the vast majority (81%) of which said no.

When asked to explain why not, members gave a range of reasons. Some felt the guidelines make their product too expensive and therefore priced them out of the market - whether that’s their artwork or their time as artists (i.e. teaching, running workshops etc). Some talked of altering their fees depending on who they want to work with e.g. private galleries or small charitable organisations – sometimes receiving payment within the guidelines, sometimes not.

“Irrelevant when trying to sell work. It either sells or it doesn't.”
“I can’t follow the guidelines as it makes my products too expensive.”

When members talked positively of their experiences of using the guidelines, they mentioned how having the guidelines empowered them to ask for more money, and how they are used as a reference and negotiating tool when discussing costs with potential and current clients.

“Being able to just send them the link to the Union's guidelines were utterly crucial. No comment or quibbling from them then. It was great.”

“Often artists are dealing with art organisations or start-ups just as financially pressured as themselves and so demanding a fair wage seems impossible.”

“Yes, but also other rates are often negotiated in order to secure a deal. Also, as someone that coordinates other artists, it is often hard to maintain Union rates of pay when funding sources remain low.

“After becoming more aware of the official rates I felt more empowered to ask for a little more for workshops.”

“Only very recently have people started to pay me the recommended pay and commenting that they are doing this. This makes a huge difference to my income. This has not been on all jobs, but a significant number of recent contracts, and this feels very encouraging.”

Many members noted that the use of contracts was not common practice in their sector, particularly for smaller jobs. Contracts are usually in the form of either a verbal or email agreement and largely initiated by the artist rather than the client. Some felt that clients are sometimes put off using a contract, and one noted that contracts are not ‘worth the paper they are written on’ with regard to protecting an artist’s copyright and artistic ownership of commission work. A number of members stated that they would like to be better at preparing and issuing contracts and further support here would be good.

“often only a verbal agreement is brought to the table for commissioned practice. It really is often my call if I wish things to be signed off professionally.”

“All just on verbal agreements by and large, even for Council-commissioned projects with budgets of up to £11,000.”

“I try to provide any organisation that wants to work with me with a contract but often this puts them off - especially small organisations.”

Members were asked if when exhibiting work in publicly funded galleries whether they receive an exhibition fee. Only 50 people answered this question, almost a quarter (24%) answered yes and 76% answered no.

If members had answered yes to the question above, they were then asked whether they also receive payment to cover the costs for production and materials. More people (72) answered this question than the previous question, almost a fifth (21%) answered yes, a third (33%) answered no, and 46% answered not applicable.

“I don't think I have ever received or given a contract for work. I'd like to be better at this, in terms of providing a contract myself.”

“I usually have a contract but just not in every single case - it depends on how big the job is and whether I've worked with someone before.”

Due to the nature of the questions in this year’s survey it is difficult to make direct comparisons to previous years in relation to the use of contracts. However there is a general trend that the use of contracts tends to be hit-or-miss and lacks consistency from one piece of work to another.

The lack of payment of exhibition fees remains high; despite a slight increase of 4% this year it remains that only one in four (24%) members received an exhibition fee. The proportion of members who reported receiving an exhibition fee in 2017 was 20% (one in five).

We have used insight from surveys, learning events and workshops to develop three legally robust...