Members were asked what they consider to be the top priority in ensuring Scotland's art sector is a healthy, viable and sustainable area to work in...

The Scottish Artists Union has a growing membership from across the artistic spectrum. This section looks at the data available on membership taken from this year’s survey, primarily theirlocation, how this relates to the Scottish Index of Multiple Deprivation (SIMD), and why members feel it is important to be part of the Union.

Since the 2017 survey the Union has introduced NationBuilder, a new platform which allows the Union to manage and communicate with their membership in a more meaningful and efficient way. The new platform was used to host this year’s survey. 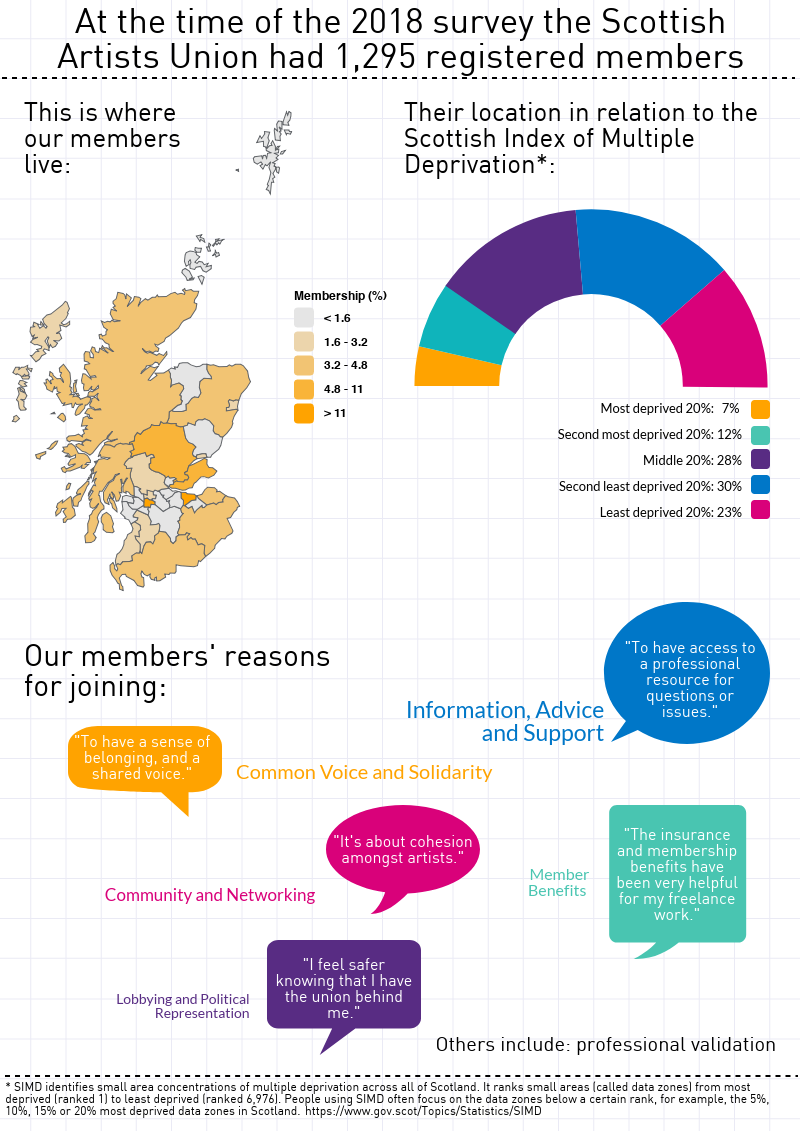 At the time of the 2018 survey the Union had 1275 members registered on NationBuilder. From those, 1264 postcodes could be sorted into Local Authority areas. All of Scotland’s 32 Local Authorities were represented by the membership; the four most common Local Authority areas were Glasgow (22%), Edinburgh (14%), Fife (9%), and Perth & Kinross (5%).

‘Deprived’ does not just mean ‘poor’ or ‘low income’, it can also mean people have fewer resources and opportunities, for example in relation to health, such as access to a GP and education in relation to the performance of schools or colleges in the local area. For more information see: www.gov.scot/Topics/Statistics/SIMD23

People using SIMD often focus on the data zones below a certain rank, for example, the 5%, 10%, 20% etc.
The analysis showed that 23% of members live in what are considered to be the 20% least deprived areas of Scotland, i.e. the wealthiest areas in Scotland; and a minority (7%) lived within the most deprived 20%.

Why is being part of a union important?

Members were asked why being part of a union is important to them. Members gave a number of reasons why they had joined the Union. The most common reason was for the information, advice and support received through the Union. The second most popular response was around having a common voice and the solidarity the Union brings, particularly in an ever more uncertain world where pay and conditions need to be protected. Many noted that they often work in isolation and appreciated the community and networking opportunities the Union provides.

“[Being a member] fosters a sense of solidarity, support and camaraderie and there is a sense of strength from being part of a collective.”

“It’s important for artists to work together, to create a collective voice in orderto lobby for better working conditions because otherwise as individuals we are often at a disadvantage, working within a sector where inequality and badpractice is ubiquitous.”

“I spend a lot of time on my own [...] and what I have found over the last few years is that I feel increasingly supported by the fact that I am a member of theUnion and knowing that support is there is very important to me.”

Many members were keen to highlight benefits, such as insurance, as well as access to workshops and training membership offers. Some felt that being a member helps to validate their work and make them feel more professional. The importance of the Union’s role in lobbying and political representation was also a common response.

“It connects me to artists and organisations with whom I would not have contact on a regular basis.”

“Dealing with galleries and trying to get paid can be a bit daunting andisolating so feeling like I am part of an organisation that can give me adviceand support is reassuring.”

“The insurance and learning benefits have been very helpful.”

“I think some artist's struggle with taking themselves seriously in a culture that can also be dismissive;having a union is empowering.”

“I've always been a union member in my various careers - being an artist is a job, and being a workermeans, for me, being in a union.”

“It's important because I believe myself to be a professional in the same way as our society regards other professionals to be such as doctors, teachers, lawyers, and accountants.”

“Artists are workers and we deserve the same rights and representation as any other sector of the labour market.”

Responses to previous surveys suggest there is limited change from previous years in the reasons why people join the Union.

Ideas from the membership

The survey gave members the opportunity to raise any other issues with the Scottish Artists Union Executive committee.

Only 15 members provided a response to this, some of which were to thank us for the Union for its work and to encourage an expansion and continuation of this activity, particularly the programme of learning.

Other issues included a plea to focus on: pensions support, contracts support including legal support, supporting older artists, increasing awareness of the Union to a wider audience to encourage membership – e.g. a range of roadshows, more support and events outwith the central belt and an awareness of the issues affecting artists in more remote areas.

Two members mentioned the Union’s political approach, one stating that they would like to see more active lobbying in parliament to support artists, the other asking the Union to concentrate on artists' concerns and welfare rather than generalised political ones.

“Do not be afraid to be radical.”