Each year the survey has asked questions about artists’ income. This enables the Scottish Artists Union to explore the financial state of the membership...

Each year the survey has asked questions about artists’ income. This enables the Scottish Artists Union to explore the financial state of the membership and where potential support efforts may need to be focused. This year the survey asked a range of questions relating to artists’ sources of income and their financial circumstances. This section provides an overview of the responses to these questions. 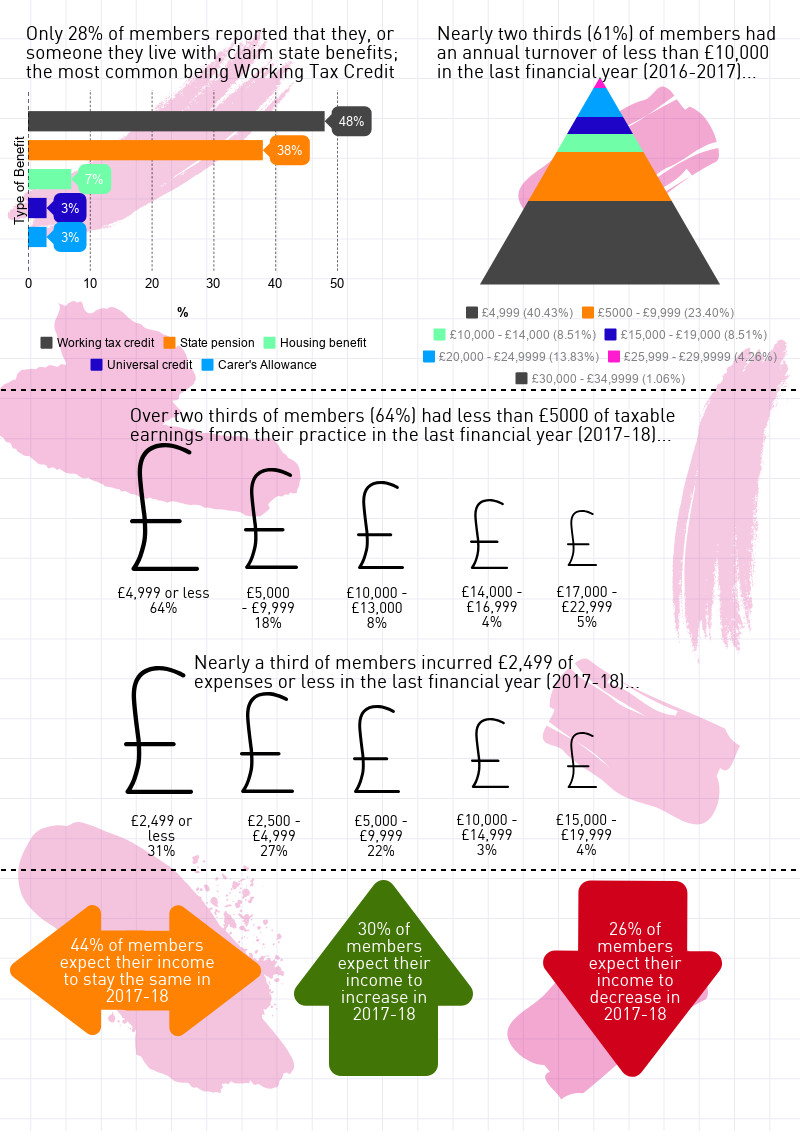 Members were asked if they are registered as self-employed; from the 95 members who answered this question, 4 out of 5 (80%) are self-employed. For those who are self-employed, a large majority of members (82%) use an accountant to handle their tax requirements.
When asked about their primary sources of income, 94 members responded to this question. Only 40% stated that their art practice is their primary source. The most common income sources from their practice are through sales (56% of 94) and commissions (50% of 94).
From the 91 members who responded to the question about the status of their practice:
Members were asked to give details on any state benefits/entitlements they or their household receive. Only 29 people answered this question; the most common benefits received were working tax credit (48%) and the state pension (38%). Other benefits included: Housing benefit, Universal credit, and Carer’s Allowance.
In relation to turnover, nearly two thirds (60%) of the 72 members who responded to the question stated that the annual turnover of their practice in the financial year 2016-17 was less than £10,000. The third highest turnover bracket, at 13%, was £20,000-£29,999 with only 1% stating that their turnover had been between £30,000 and £34,999.

Four members gave descriptive responses which included “no idea”, “I’m not teaching to earn an income”, “tbc. this is my first year self-employed”, and “I visualise the business to be loss-making for at least the next three years”.

Eighty members responded to the question about taxable earnings from their practice in the last financial year (2017-2018). Of those, four out of five (82%) earned less than £10,000 and only two members (3%) earned £23,000 and above.
Regarding expenses incurred (studio rent, workshop facilities, production, membership fees, application fees, paid opportunities, travel, website, marketing, training etc.) to maintain their career during 2017-18; from the 67 who answered this question, the majority (80%) stated they incurred less than £10,000 in expenses. Only 4% (3 members) incurred over £15,000 of expenses.
Eight members gave descriptive responses, these included “training, equipment, materials, travel stands”, “production travel”, “travel accommodation, equipment, training”, “don’t know”, “production, membership fees and application fees”, “materials”, “NA”, and “I’ve just started!”
Members were asked about expectations for their practice in the next financial year (2017-2018). Eighty-four people responded to this question. Nearly a third (30%) of members felt positive, indicating that they expected their earnings to increase, however just over a quarter (26%) indicated they expect their earnings to decrease, and 44% indicated they expect their earnings to remain the same. 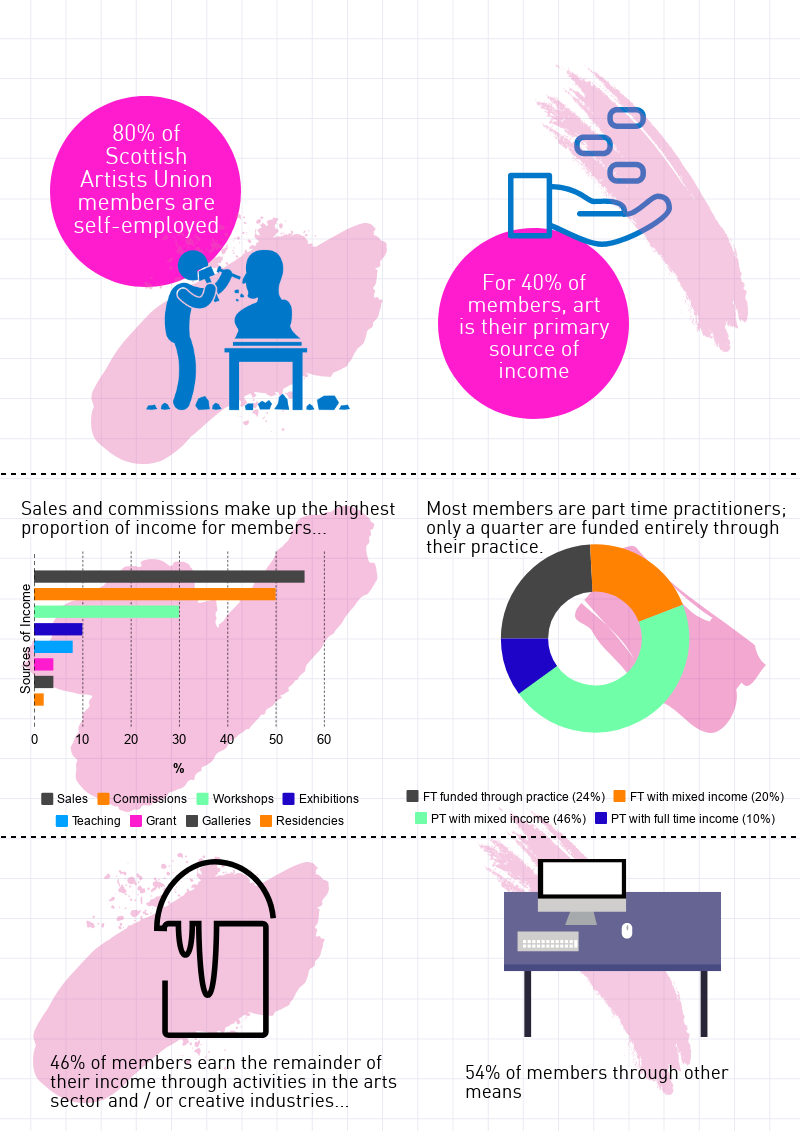 The percentage of members registered as self-employed has remained constant, moving from 78% in 2014 to 81% in 2017 and averaging 80% over thefive years members have been asked. The number of members who statedthey use an accountant has risen, perhaps indicating that the participants this time hail more from the active ‘professional’ artist group, as opposed to hobbyists.

The percentage of members who reported a turnover of over £25k has decreased to 5%, after enjoying a slight upward trend over previous years which had seen an increase from 5% in 2012 to 8% in 2017.

Artists’ confidence in the state of their earnings for the following year has decreased by 6%, 64% believed they would earn the same or less in 2017’s survey, in this year’s survey the figure was 70%.